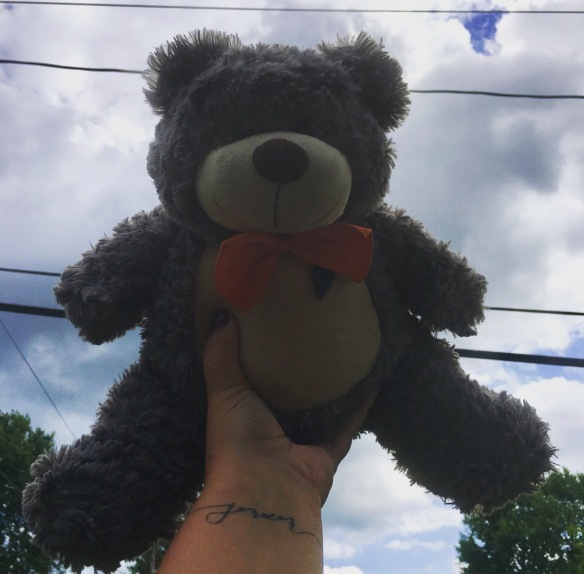 The fifth of every month weighs heavy on my heart, this month is no different.

I didn’t know if I wanted to write today, maybe this would be the first fifth I didn’t write on. For the whole morning and most of this afternoon, I laid on the couch crying. Sixteen months. Time hasn’t soften the loss of you like everyone thinks. In fact, it’s done quite the opposite. I hate that there’s this distance between the last time I felt him, not knowing when I’ll finally see him again.

Those thoughts are haunting. They take me to a place I don’t like to travel often. I get lost in them, trying to figure it all out and wonder where I go from here.

As I sat there, I didn’t want to write and tell you all this. I want everyone to know this hurts and it’s not how it should be.

If he was here today, I’d make him funfetti cupcakes to celebrate another month of growing. He’d have blue frosting all over his face and just laugh. People would think I was crazy for celebrating each month and maybe we wouldn’t if I didn’t know what losing him was like. I do now and if I had that knowledge, we would celebrate.

It’s a dreary day, but no rain, so we would have went to the zoo to walk around. He would know what sounds the animals made and mimic them. I can imagine him pointing then making their noise, then look back at me with that look. The look that only children give their parents. A look I so desperately wish I could’ve got from him.

I would buy him an animal book to read for bedtime. He already has so many books as is, his collection would have only grown in sixteen months. That book would be read at bedtime, after our nighttime routine. On the drive home and listen to music he’d dance in his car seat to, until he fell asleep. Then I could shut the music off and listen to him breathe as I drove. That would be my most favorite noise in the world.

Maybe we’d stop by grandma and grandpa’s house to show him our adventures to the zoo. Who knows, maybe they would have been the ones to take us, but we would all be together. A family should always stay close.

When we got home, we would be together. He would tear through the house and want another cupcake that I would probably give him. Sixteen months is something to celebrate. After his face was all blue again, it’d be time for a bath. All his favorite toys would be brought in to help him get clean. He’d get dried off in his little robe, then into his pajamas. Slowly, he’d grow more and more tired until it was time to read the animal book we got earlier that day. With each word, his blinks would get longer until dreamland welcomed him. I’d lay him in his crib, shut off the light, and tiptoe quietly out of his room.

As I would prepare for bed, I would get ready for the next day. There would be no worries, no death, no grief. Just him and our life.

That’s how this day should be as he turned another month older.

This post was inspired by the ’30 Day Writing Challenge For Stillbirth Mothers‘ day five prompt.