Over the last few months, Mila has discovered her voice. She’s always been pretty vocal, but she’s been remembering words and phrases. Her first word was cat, although I tried to get her to say and know ‘mama’ before any. She knows peoples names, random animals, ‘lo’ for hello, and a lot more. Before we left for vacation last month, she even started saying ‘uh oh’ in context. Seriously was the cutest thing, until she started throwing things on purpose and redeeming herself by saying it. She’s cute and she knows how to work it. 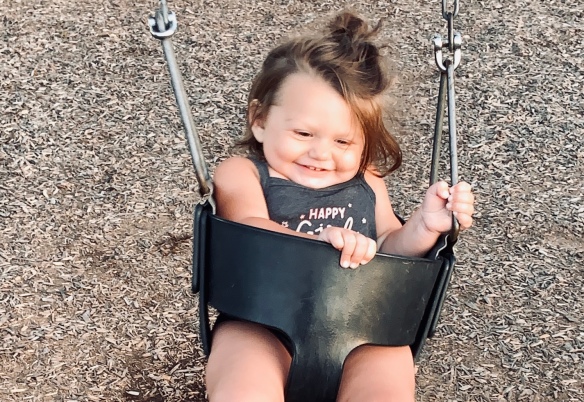 I mean, look at her.

Shortly after we got home, Mila learned a new phrase… one not so Rated G. I can finally mark down her first swear word. Anytime she drops something, trips, or someone startled her, her eyes get big and she says, ‘oh shit.’ At first I thought it was a fluke, then she just kept saying it. I can’t lie, I totally laughed when she started saying it and people usually do when they hear her say it. Hopefully this little phrase won’t stick and the next one will be just as cute, but a touch more innocent.

But for now, here she is saying her current favorite words. I’ll keep secretively giggling and persuading her to say ‘uh oh’ to her face instead.