Another month is here without him. One more that I never thought I would survive, yet here I am trying to be strong. The anticipation of each month change has not gotten easier since the very first one. I feel its weight in my bones trying to make me crumble.

This past month has been one of the hardest. Two weeks ago my second child’s lifeless body was taken straight from my womb. The grief of losing him or her ontop of what I feel for Jensen and his loss has been complex. Most of the time I don’t know how to describe what’s going on in my brain. Maybe this extra weight has made this month change so much worse.

I went into his room today. Sometimes I have this strong pulling to just sit in there, more than my everyday look.

Every time I step in there, it’s like I’m transported to another reality. I see his room what it would be like if he was here. Not at infancy, but right now running and testing his limits three months after his birthday. Toys are scattered along his rug and there’s clothes to be put away. There are projects we have done on the wall and all his books are on the shelves. I see this scene and him in there. Somehow I wish I could describe it better than just being transported to another reality, it’s literally like I step through another veil and there he sits. That’s how I picture Jensen and I’s heaven.

After snapping out of the world I want to be living in, I saw things I hadn’t paid attention to in awhile. The little details that I love that wouldn’t be exactly there if he was here. On his changing table lies a little racecar and my favorite sign I bought before he was born. ‘Just be awesome.’ There wasn’t any pressure on him to be something, just as long as he was happy and growing up to be a good boy. Then there’s the books I actually have in his room. Stuffed away with a lot of his things is his whole library, many of those books from the book drive we did during the baby shower. The ones in his room are my favorite though. Sometimes I pull them out on special days and read out loud for him to hear. I know he’s listening and sometimes Leo comes to listen too.

Yes, I accidentally bought two of the same J’s…. oops. 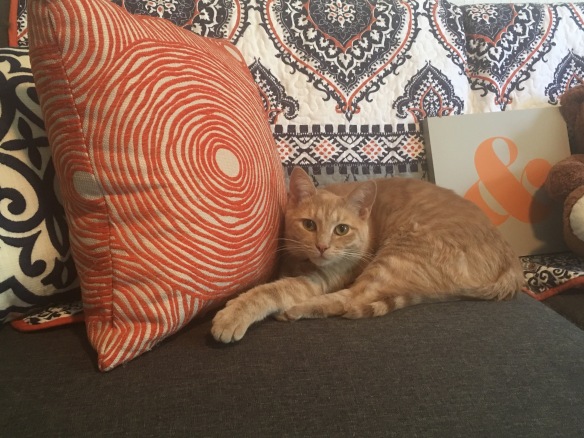 Fifteen months have gone by since I last physically felt Jensen. In that time I’ve picked up most of the pieces, dropped them multiple times again, and kept trying to place them back to a new normal. I’ve felt the biggest heartbreak, twice, but I’ve also learned how to love so deeply.

To feel everything so deeply.

I wish this wasn’t my reality, but I’m surviving and doing my best to thrive. Even if I knew what was going to happen, I’d still choose my little, blond hair boy born fifteen months ago.