All of Jensen’s Christmas presents should be bought by now. Even though I know I would keep finding more and more to get him.

The freshly, fallen snow should have fascinated him all throughout the weekend.

I should be watching him grow each day.

He should be here, but he’s not.

There are times during the day where I’m just grief-stricken and in utter disbelief of my life. In fact, all of these should moments are completely different that what I ever intended. I haven’t bought one Christmas present for anyone so far this year. The cold and snow are just annoyances to me. The only growth that surrounds me is my growing strength to face another day and soon, another year.

Quite frankly, I’ve been negative about all that’s happening around me. Frustration has taken root deep down. I know it’s just my mind trying to navigate grief throughout the holidays and it trying to conceive that Jensen isn’t here for his first earthly holidays. Each day I instantly think of all the ‘shoulds’ I thought I’d have. Reality has a funny way of telling me that they are not happening, but there are beautiful moments that happen because Jensen did live and is very loved.

As I’ve been writing this, I was sure I had introduced Jensen’s brick in Stow protected by the Angel of Hope. Turns out, I haven’t written about this beautiful memorial that was built by pure love. If I end up finding a post where I talk about the first event, I’ll hyperlink it here. Long story short, there is a book written called The Christmas Box by Richard Paul Evan which is about a mother’s grief of her child. The book was a really big hit among grieving parents who wanted to honor the story, their grief, and children, by bringing an Angel of Hope statue to their town. Eventually Stow, Ohio saved up and was able to also get an Angel of Hope to honor all children gone too soon. You can find out more on their website, here. On that link you can also buy a brick for the Stow location. If you’re not by me, there’s a ton of different amazing locations where the angel is. That list can be found, here.

Shortly after Jensen was born, I stumbled across the Angel of Hope. Since he was cremated, I don’t have a spot to go for him. I knew I wanted to though. Being able to buy a brick right in front of the statue was a way I could get out of my house and visit Jensen in a spot. I’m able to take flowers to lay on his brick and also on the base of the angel. I know I’ve just said this, but the location is breathtaking. It’s quiet and solemn. Every time I’ve been there I’ve just been able to let my tears flow. And, there’s something about seeing your child’s name that makes you pause.

Here is Jensen’s brick. Flowers from his mama and pennies from his grandpa. 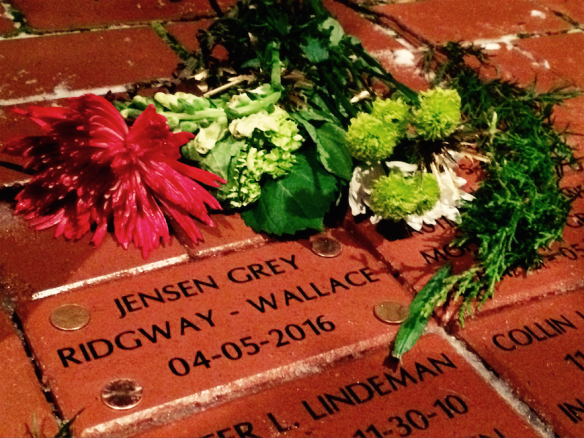 Well, yesterday we were invited to go to the Annual Candle Lighting Ceremony to honor Jensen and the rest of the children who do and don’t have bricks. It was so frigid outside. The snow slushed under my feet and I had to really watch that I didn’t fall. Once we made it to the group, I was just in awe. The amount of people there was so overwhelming and not in the way you’re thinking. My world really shakes when I know there’s so many other people feeling how I do. Obviously, everyone is in their different stages of healing, but to grieve a child through the holidays… there’s really no words of comfort.

When we a lit our candles, it was just a wave of light that warmed me even through the freezing weather. I always say Jensen is my light and constantly have candles burning in my house. Every time I see flames, I feel his presence. We felt it so much last night, that my dad’s cup lit on fire and he had to throw it down. Laughter is sometimes much-needed in these moments. To be able to smile through the tears and not knowing what to say really shows something.

Of course the parents who put on the ceremony were able to share and talk. One thing really stood out to me. They lit five different candles and one of them was lit for the love parents have for their children, even through death. He said, something to the effect of, look how much each and every single person there loves the child they are there for. That even through the freezing cold temperature, we stand there to show our love. To show that no matter has happened, this love is so strong. It’s unbreakable. My first thought while standing there was, I would stand out here every night if that’s what Jensen needed. Then I thought, I would do anything for Jensen. There is literally nothing that would stand in my way if it was something I had to do for him.

You can’t see this, but I’m sitting here just crying and having to keep pausing to wipe my eyes so I can see. It is crazy for me to think what I would do for him even though he’s not here. It’s like I challenge myself to an even more outrageous act and there’s not even a second of doubt that I wouldn’t do it. Often I wonder how that would be if he was actually here. Would it be more or less? Or would it just be different? Most times I think it would just be different…

Back to where we were originally.

All those ‘shoulds’ are never going to go away. Even when Jensen is supposed my age now, I’ll try to imagine what challenges he would be facing and how it would be so fulfilling to see him overcome them. It’s hard for me to think of what I’ll actually be doing in twenty-three years, but it’ll never be what it should have been. No matter, with each candle I light, whether it be in ceremonies like last night or in the comfort of my home, I do it as a promise. A promise of love and to keep doing everything in my power to show him that. Right now, that’s to get keep living and doing the best I can. 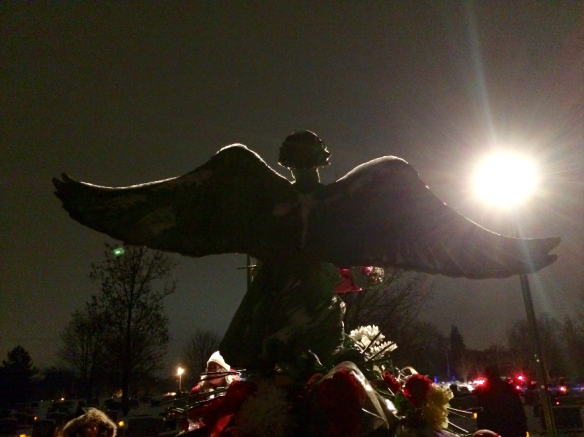 Dearest Angel of Hope, keep Jensen and all the children taken to soon safe in your reach. I look to you for hope, love, and the will to keep pushing on from day to day, month to month, and year to year.

Just wanted to add, I will be going on vacation this week. If you haven’t put your child’s name on this post, please do before I close the comments on Tuesday. In case you didn’t hear, I will be going to Punta Cana this week and offered to write baby names on the beach. I already have a lot of names which is heartbreaking, but I’m happy to help and to remember Jensen and all his friends. After I get back, I will be posting an album of all the pictures Jensen’s Facebook page.