Another month has passed; twenty-two to be exact.

When I woke up this morning, I felt the fifth. I know I’ve used that expression before, but all I kept saying is, ‘it’s Jensen day. It’s the fifth.’ Honestly, I thought this would pass. I wouldn’t even be telling people his age in months if he was here. Sometimes when I talk about him, I’ll say he’s almost two, yet when this day comes I could probably tell you the months, weeks, and days probably down to the minute.

His loss still feels so fresh.

Today, I checked the prompt for the What’s Your Grief Photo Challenge: pain. I’ve felt all types of pain since Jensen’s birth. Heck, I feel like I’ve been through all Dante’s nine levels of hell. When I read it, I didn’t want to focus on any more pain. Even though I tried my best not to focus on it, I was stuck at my three-hour glucose exam for Jensen’s little sister. I had to give blood four times, twice from both arms. It made me feel weak and sick to drink whatever they put in that. The three hours went fairly quick, but when I got home, I crashed on my couch after getting sick. I was in pain and usually on these days I celebrate Jensen.

In some ways I did. I told the lady working  and the other girl in the waiting room about him after they asked if this baby was my first. It stung. No, she’s not my first. She has a big brother in heaven who watches out and protects us both. I’ll never deny him, even if it would seem easier to random people. Somehow I would rather make every person in the world ‘uncomfortable,’ if it only meant for me to say his name. Maybe that makes me selfish, but that’s the only way I know how to mother my son.

Jensen’s absence has brought me so much pain and longing. I want to end the day focusing on what I wanted to give him: life experiences and love.

After I woke up, the first thing I looked at was the hands on my wall that we did on Jensen’s first birthday. I think the last time I shared them was that week. It forever shows me protecting him. Today, I felt like it showed me that he’s had my hand throughout my journey through hell and back. That he’s been right there through it all. It also has our family surrounding us. This reminds me that whenever I am drowning in pain, there’s hands reaching out to help me back up. To pull me out of the pit of despair. There’s twenty hands on the canvas today, but there’s two more inside of me, holding me up on another hard day.

Grief journeys bring their own individual pain and trials. In my twenty-two month journey, I’ve realized we don’t have to do this alone. Nor does the love and memory of those who have gone ever have to go away. 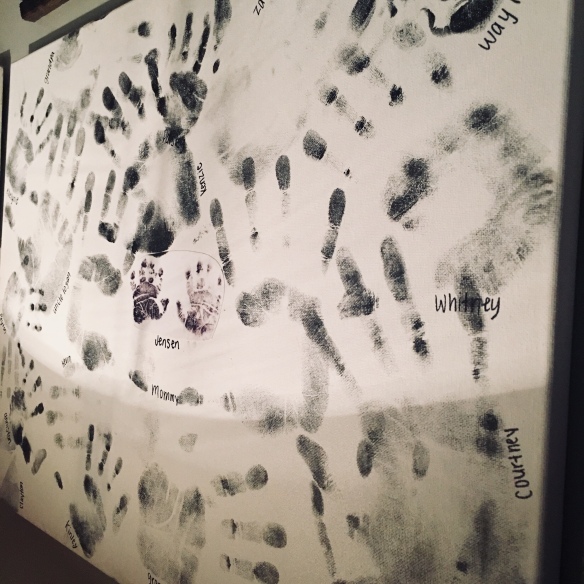