A couple months ago, I noticed something up with two of Mila’s teeth. I could’ve sworn they were cavities, but it didn’t make sense that she would have them so young. Or the fact I’m sort of crazy about making sure her teeth are brushed and she takes her fluoride supplement each day. I mean, don’t get me wrong… she drinks juice and has sweets every so often, but not enough to damage her teeth, right?

Since this summer, I’ve been keeping a closer eye on them and they haven’t gotten better.  I’ve honestly had sleepless nights researching what to do for her and how I could do better for her dental health. It’s been a sore subject for me and I know how silly that sounds. I do my best for Mila everyday and I’ve felt like I’ve failed her teeth.

So, last week, I decided to finally call and make an appointment with a dentist. FIRST OFF, it is difficult to find an office to take a child under two to get their teeth checked and potentially worked on. With determination, I did find someone. Thankfully, they were able to get Mila in almost immediately.

Then the anxiety hit.

I thought the dentist would think I was a bad parent. I thought Mila would scream the entire time. I thought they would have to pull her teeth as soon as we walked in. I thought the appointment would be anything but good.

Fast forward to the day of the appointment (Monday), I have to wake Mila up from her nap to get her to the appointment on time. Snow is falling and it’s way too cold for anyone to be going to the dentist. My mom, Mila, and I file our way into reception and they are greeted with a very grumpy toddler.

After checking in, Mila goes to explore her surroundings, but finds herself at a loss when she isn’t able to go in the back. For a little while, she just laid on the ground, protesting to cooperate. I can’t say I blame her as the minutes ticked by during our wait. Finally she gets distracted by the snow and eventually mama cuddles.

Once we’re called back, Mila decides to cheer up and let her happy presence be known to everyone she passes. When we get back to our little area, the anxiety for me starts to set in again. While Mila played with the dentist’s ‘toys,’ I just kept picturing having to pin her down while they pulled all her teeth.

Yes, my brain is so amazing at producing vivid images at the worst possible times. Thank you brain for giving me that beautiful gift. 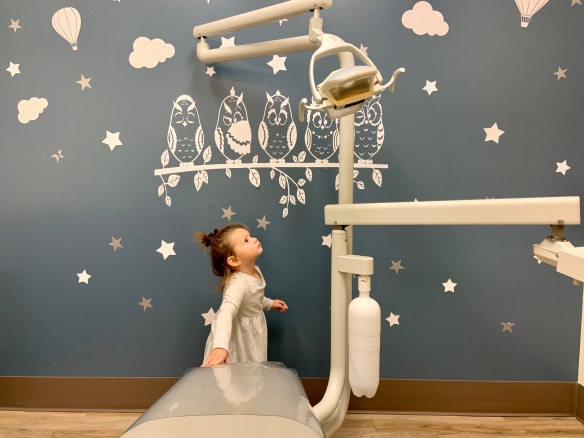 While waiting, again, Mila discovers she can see inside the room beside us. She sees a family getting their teeth cleaned. At first, she thought she was just crashing on their nap, she soon discovered they were doing anything but going ‘night-night.’ The dentist tools whirled and made so many noises in the other person’s mouth. I wish I could have listened to Mila’s thoughts while watching this somewhat horrifying event for her, take place. The good news was, I didn’t need to hear her thoughts, I could just look at the pure confusion (and slight terror?) on her face. Her big, compassionate heart kept prompting to ask my mom and I if they were okay. I don’t think she believed us, at all.

She then made herself comfortable on ‘the chair.’ The dental assistant soon came and tried to brush Mila’s teeth. She was welcomed with a firm no. I was happy my girl could stand her ground, but terrified knowing what came next. 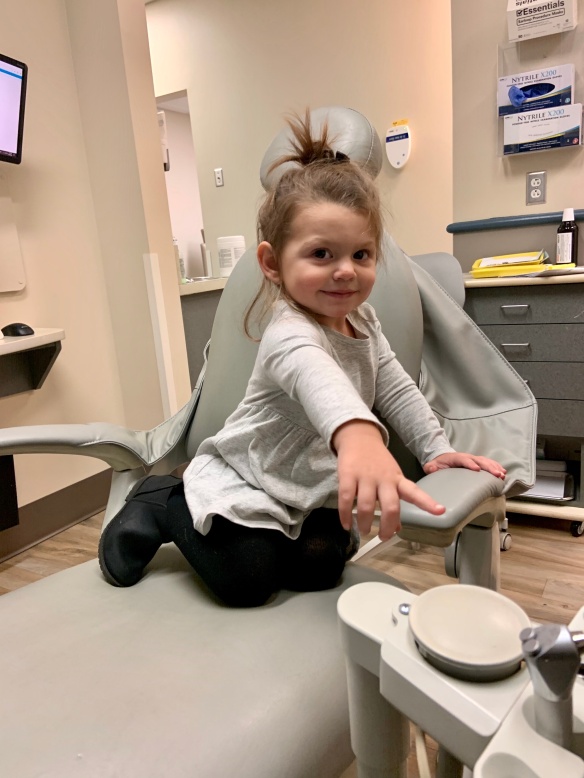 It all led up to this moment. Mila’s dentist came to check her teeth. She was somewhat intimidated by this man, but weirdly laid down to let him see her teeth. He had me lay her down across me and hold her arms. Her head was placed in his lap and as he tried to brush her teeth and put some kind of coating over them, she awkwardly laughed and I could tell how truly uncomfortable she was. Big crocodile tears fell from her eyes as she looked for me to help her. My heart broke, but I knew this was for her benefit.

As he finished cleaning her teeth and checking her our, she really did such an amazing job. Honestly, I was so proud of her. As a parent, it’s so hard to take your child to the doctor or dentist and not be able to explain why they’re getting a shot or why some random stranger is looking in their mouth. She did call him a meany multiple times after, so I guess she got her revenge too.

I know this is a long post, but this was a big day for her and I. Unfortunately, we found out Mila’s two teeth do need further assistance. Quite frankly, I didn’t know if I wanted to share this with all of you. I still feel like it’s somehow my fault, even after the dentist promised me that her teeth are just soft and prone to cavities. He even told me that he thought I was a great parent and to keep brushing her teeth to the best of my ability. But, Mila has to get caps on two of her teeth and will be under anesthesia for it.

This isn’t anyone’s ‘business’ besides Mila and I’s, but after making myself believe I’m a bad parent because she has two cavities and needs to get them fixed, I needed to share. If I think this, I know another person has had the same thoughts too. I just want them to know that you’re doing what you can and sometimes stuff just happens. Now I just have to make myself think that too.

The day didn’t end up in a negative place. Right after her appointment, we took her to Build-A-Bear for the first time ever. The pure joy of being able to make her own bear (dog) and pick it out an outfit made Mila’s world just right again. 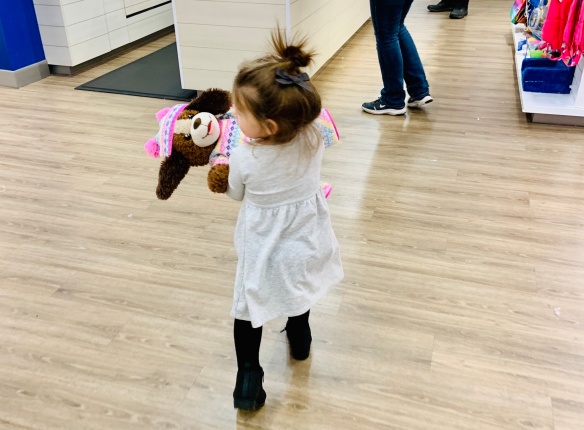 I’ll never forget her holding her little dog in the middle of the store out from her and just screaming ‘yaaaaaaay!’ Her smile lit up the whole entire place and let me know everything’s going to be just fine.

Everyday motherhood teaches me something new and on this day, I learned that we have to be brave in situations that make us ultra uncomfortable. If this little toddler of mine can take on such a big day, not knowing what was going on, I can take on hard things too. 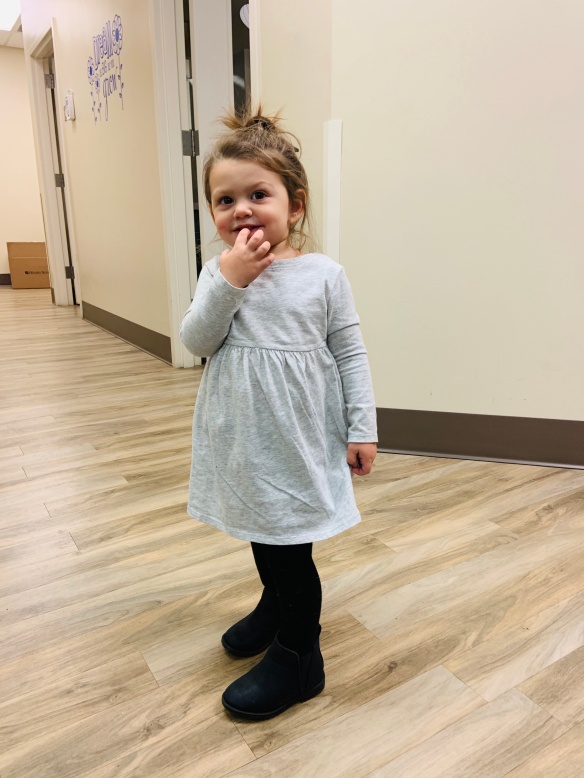