Fourth of July weekend did not go entirely as planned. By that, I mean it didn’t go at all how I thought it would.

I’ve spent every Fourth of July weekend in my hometown. There’s a parade, fireworks, and a big cookout. Heck, that’s why I picked a few things on our summer bucket list. So when my mom texted and asked if we wanted to go to the beach for the weekend instead, I was a little shocked. But, who can pass up the beach? So we packed up and headed to Savannah, Georgia, which is right by Tybee Island and Hilton Head.

Instead of outlining everything we did, I’ll just say we had a blast. I swear Mila gets more adventurous and hilarious every single day. It felt like we were either chasing after her or laughing with her.

One of the funniest things that kept happening is her saying her new word. The last two weeks she’s been learning the word ‘hot.’ Like if there’s coffee around or the stoves on, I tell her it’s hot and not to touch. Of course, she’s been experimenting on how to say it and it’s the cutest. Check the video at the end of the post to see what I’m talking about. Anyways, the first day we went to Tybee Island and we got her out of the truck. It was like 100 degrees out and like thick air. I don’t think Mila has ever experienced heat like that. My brother’s fiancée, Chelsea, was holding her and Mila she looked at her and just said ‘hooooooot,’ like it had finally clicked what hot actually meant. After that, every time we went outside, she had to let us know she felt the heat.

We also learned even when Mila’s teeth are hurting and the suns too intense for her to eat, she’ll always take a mouthful of sand. If the sand wasn’t in her mouth, it was all over her body or being thrown on someone else’s. It’s a good thing she likes the water because we were always going back in to get it off of her. As soon as we went back to land, she’d just cover herself again. We pick our battles as parents, don’t we?

No matter if she was covered in sand or pushing down sand castles, she was having a blast. Somehow after applying sunblock multiple times throughout the days, she still ended up with a perfect beach tan. The Fourth of July this year didn’t come with fireworks or a parade, but I think it was one of our best. 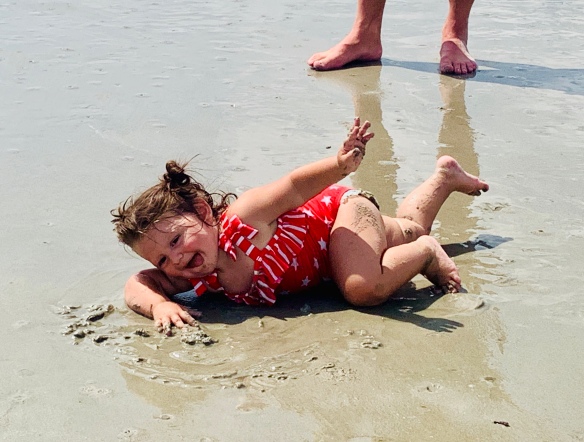 Even though Mila and I didn’t check off the expected bucket list items, we did check off beach day and made way more memories than I imagined. I wonder which ones we’ll get to next.

How did your holiday weekend go? And make sure to check out this cute video of Mila saying ‘hot.’