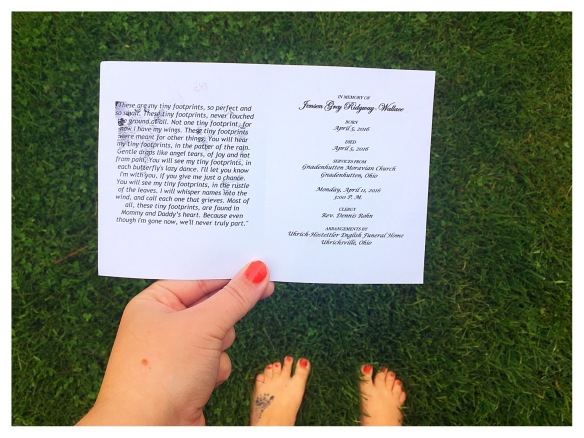 April showers bring May flowers was the only phrase I kept repeating this day last year. It was a rainy day, but the sun was peaking out. My room had been pitch black, but I laid there never wanting to wake up. This day felt unreal. I knew when I turned the light on I would see the outfit I had chosen over the chair waiting to be worn. The bag the hospital gave us would be there too. If only I could keep my eyes closed and not have to face what challenges I knew today held. My buzzing phone made sure I remembered.

‘We have Jensen here. You guys can pick him up whenever.’

The baby that I had grown for thirty-eight weeks had been cremated and his ashes in his urn were ready to be picked up. It was especially important to have him cremated by today, since it was the day of his funeral. I remember getting the courage to get out of bed and I just went straight down the stairs to tell my mom and dad. They quietly decided they should go get him before the funeral, so I could see his urn beforehand. Probably not to make the experience at the church even more emotional.

I can remember them making me eat, but have no idea what I ate. My body was just going through the emotions. I didn’t disagree with anyone because I had no energy to do so otherwise. The TV was just on, trying to quiet the storm that was playing out in my head.

Honestly, I had to look like a zombie. I sure as heck felt like one. Everyone was scrambling around. My dad ended up going to get Jensen. Mom frantically was looking for a frame to put an ultrasound picture in for him. They got some of his hand and footprint seashells to show. Each were doing their part to help and they did amazing.

When dad got him with Jensen, I remember thinking his urn was so shiny. He was in this bag and it had this slip with his name on it. My dad didn’t really know where to put it, but I remember just wanting to hold it. I finally had Jensen back with me and I needed him right beside me. So that’s where he went. Right beside me, but he was on the table and I was sitting on the couch. I kept staring. In between my series of constant thoughts, I can distinctly remember wanting to say how disheartening it was that my baby fit into this urn. All of who he was and should be, just forever resting in his urn.

My mom had to force me to get dressed. It didn’t feel real until I saw myself in the clothes I’d wear to my son’s funeral. It rained on me as I got in and out of the car and I just protected Jensen’s urns and things. My dad had the umbrella over me when he could, but I didn’t care about me.

We sat there in the front row to the left. His urn candle was lit and people started filling in. I was at a loss of how to greet people to something like this, so I just sat there and let people come to me. Still, my eyes could not leave the two birds that were flying on it. The candle made it even shinier too. I can’t even tell you who was all at his funeral. Almost everyone came to me, except two people. Those two people I have not talked to since before that day and never will again. It felt like everyone that was important came though. I don’t feel like anyone else needed to come or maybe they did, the numbnesses really blacks those emotions out. Mostly because it wasn’t that important.

The service was as nice as a baby’s funeral can go. Our stand in pastor and I came up with how it would go a few days before. We decided there would be songs sung and Footprints in the Sand read during the service. The verses his picked were spot on and when I think about that day, my cheeks can still feel were the tears fell that day. I heard every word he said and sung. When others rose to singalong, I stayed seated. If I would have stood up, I think my legs would have given out. I felt so weak, I didn’t want this day to be here.

After, there was a lunch for us. Everyone ate and laughed. I can remember being able to talk then, I even laughed at one point too. Even though we did this big ‘goodbye,’ I didn’t feel any different and I didn’t feel like he was gone. Instead, I knew he was back on the table he was at the service. I remember showing his seashells off to whoever would let me. My body and mind was still trying to normalize something of this… motherhood, but I didn’t feel like I was one. I had prints and an urn, not a baby.

April showers bring May flowers I thought when I stepped in a water puddle while carrying his urn to the car. Then again while I sat inside afterwards and heard it tap on the roof. It was the only thing that stopped me from refusing the tears to fall down my cheeks. I wanted to believe there would be a May for me. That all of these tears would bring me some kind of flower, that my little boy in his urn would mean something.