I’ve started preparing for Jensen’s first birthday party. For the past couple weeks I’ve picked up pages and stickers for his scrapbook and other little things here and there. It’s been keeping my mind busy with what I need to do. If I sit for too long lately the memories flood my whole entire body. Even though I had a little feeling that I would be getting flashbacks, I didn’t realize I wouldn’t just have the visions. I’m feeling all the emotions I did, but with no numbness or shock. It knocks me on the ground and completely exhausts me, but I have to keep going.

I have to mother Jensen the only way I can before his first birthday.

To do that and to check the boxes on my list, I had to make some purchases last weekend. At that time, I wanted to kind of wanted to keep everything a surprise for the day after his birthday post. That was until yesterday after picking up one of my purchases from the post office. I realized that planning a first birthday without having your one year old was another part of this crazy, grief journey. Planning a child’s first birthday that they won’t physically be at is something a parent shouldn’t do. Anyways, one of the items I purchased, a cake topper, was waiting for its pick up. As usual, I was excited to open up my mail and really picture what Jensen’s cake was going to look like. So, I ripped it open and looked over each letter. It was absolutely perfect and just what I had imagined in my head.

Then the tears started. 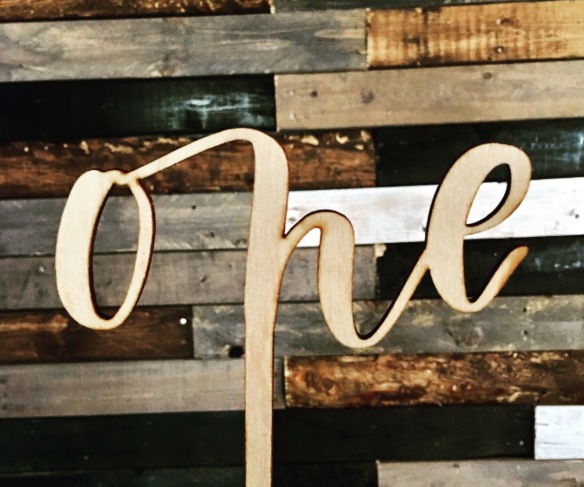 Cake topper from The Blushing Script.

My baby’s turning one. My grief will enter the second year.

This cake topper is the first thing I have of Jensen’s that says ‘one.’ It tangibly marks his age, something that I have been avoiding since he’s been born. I haven’t gotten out his clothes to measure how big he would be and I don’t have the stickers that would mark his months, but this. This was the first. I kept tracing the word with tears falling down my face; they soon turned into uncontrollable sobs.

My brain split and played two different thoughts in my head at the same time.

First, the excitement I had this time last year. I was getting the finishing touches of Jensen’s baby shower done. His baby shower was one of my favorite days ever. We were surrounded by loved ones who were so excited to welcome Jensen in our world. I can remember every detail of the day and I can remember the planning. Planning is one thing I really love to do. I painted, designed the invitations, and looked up fun games that I thought everyone would want to participate in. It was only the start of parties I’d plan for Jensen. I remember telling my mom how this time of year, every year, would be planning for his birthday party. Which leads to the simultaneous second thought.

How his birthday should have been. As I kept touching the cake topper, I imagined seeing the glow of the candle glowing back. His eyes would see the flame and the shadow it left behind. Even before that, he would have a nice picture taken with his first birthday cake and it would be right there. I shouldn’t say nice, I have a feeling he would try to eat the icing before I could get a good picture. Jensen would have smashed that cake up and I would have wanted to preserve his topper so I could have it in his scrapbook. It’s honestly one of the smallest parts of planning his party, but it means so much.

Everything means ‘so much’ when Jensen is involved.

I’ve heard the first birthday party is more for the mom than the baby. Of course the baby wouldn’t remember his or her party being so young, but the mom does. It’s a way to show her hard work in the past year and nine months (or so) with her child. I’m taking this to heart. Obviously Jensen can’t be here for his party. I know that. This is for me to celebrate his life. I’m doing what I need to feel like a semi-normal mom to my son. It’s not going to be exactly how I would have planned it if he was here, but a lot of it is going to be the same. This day isn’t to celebrate his death, it’s to celebrate his life, just like all birthdays.

It’s also to celebrate the good in the past year.

Even with his physical absence, Jensen has brought me so many wonderful days and the largest smiles. His life has given me a bigger purpose and to strive to be the best mom and person I can be; with substitute teaching and starting Grey Woods Design. This past year, even though it’s the hardest, was his first year. He’s allowed me to meet so many new friends. People I would have never have met or known, but who have enriched my life in ways I could never thank them enough. I’ve learned what this crazy thing called love is really about and that’s something to celebrate.

Jensen’s life is meaningful. He will always be remembered and loved. I will celebrate all of his birthdays with him. And in just twenty-five days he’ll be a one year old.

2 thoughts on “Planning a First Birthday Party Without Your One Year Old.”