***Warning- The pictures I’m going to post here are a little upsetting. There’s swelling and bruising on Mila’s face and I understand some can find them uncomfortable to see.***

I had this AMAZING idea the last week to try a new Pinterest recipe per week and share how it goes. Mila loves to watch and ‘help’ me cook, so I thought it’d be fun to do this with her too. For dinner last night, I decided to try out this kid-friendly (not spicy), Indian dish. I had everything cut, measured, and ready to go. As usual, Mila sat in her spot on the kitchen counter, which is in the corned where the countertop comes out furthest. She was pushed clear back and playing with the spice containers as I began cooking.

Everything was going normally. We do this for two meals a day since she’s been super steady. I didn’t even have a second thought when I turned around to grab the chicken from my island. When I looked at Mila, she was sitting happily. Then, literally, one second later, I turned around and heard a thump on the ground…

Instantly I knew she fell. I was scared to turn around, but I had to. She was laying there, conscious, and rolling on to her back. As soon as her eyes locked on to mine, she let out this blood curdling scream and I picked her up so fast. I went to our couch and held her close. She leaned back to look at me again and I realized she fell straight on her head; her left eyebrow in particular. It had already started swelling and was so red. 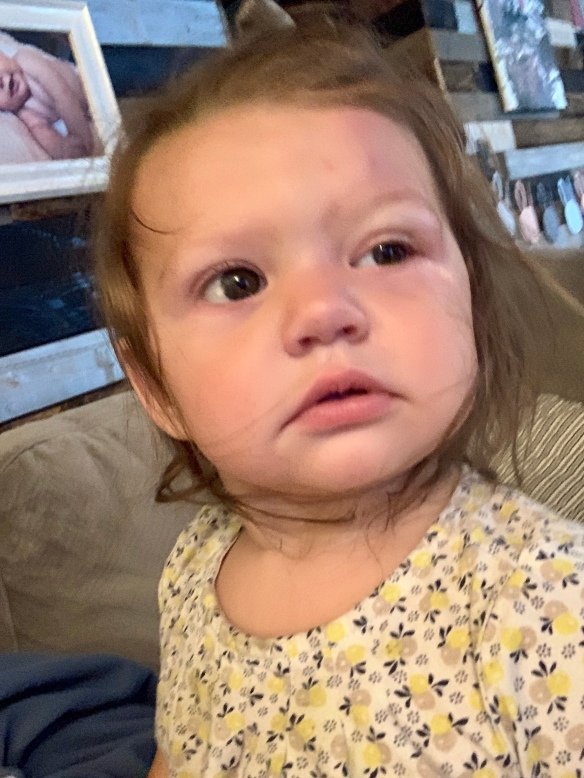 The only thing I could do in those first twenty minutes was just hold her and try to calm her down. She was scared and I’m guessing in a lot of pain. She still nurses so I offered her that and it helped a little. I could feel her sobbing in my arms and grabbed my phone to see what I should do. Family/friends messaged me back and I eventually called the nurses hotline, which they prompted me to take her to the ER to just get checked out. I did check her eyes to see if she had a concussion and after calming her down, she named who was in the pictures on the wall. This made me feel better, but seeing her eye get worse and worse I knew it was best to take her.

Thankfully my friend, Dana, was able to drive Mila and I to the hospital. I needed to sit in the back with her. One because she hates the car normally and two because I needed it for me. At the hospital, Mila wasn’t happy at all. She screamed at the nurses when they tried to get her blood pressure or if the touched her at all.

Again, I could finally get her calmed down enough and we stripped her down to her diaper. This made her happy of course, my little nudist. After throwing one more major fit when the nurse gave her Tylenol, she started playing and talking more. The same nurse who got to witness all the meltdowns gave Mila a stuffed, rainbow dog, which she LOVED. She played with the bed that reminded her of the lawn mower and reorganized some medical equipment I’m not sure she should have been playing with.

We were in the emergency room for a few hours for monitoring. The doctor was worried about a concussion, but when he observed her he realized that she was acting like a normal one year old and there was no way she’d stay still for any testing. He mentioned how he’d prefer to get an x-ray of her eyebrow bone (I’m aware that’s not the technical term, if you know it and let me know, I’ll change it on here), but told me to just keep an eye on it. She was discharged and I was given papers about head injuries, directions on how to keep the swelling down, and contact information if anything changes. 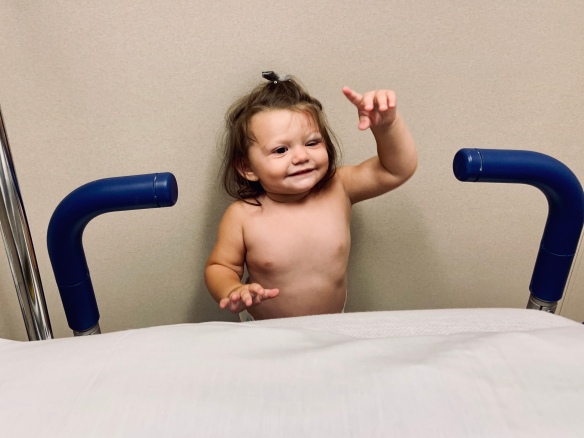 She went right to sleep on the car ride back and did well through the night. I was up for a lot of it, but wanted to make sure she was herself. I watched her facial expressions as she dreamed and there weren’t any nightmares tonight, just smiles. For that I’m so thankful.

Her face is very swollen this morning. I’ll be following her lead throughout the day and will constantly be offering snuggles. She’s so tough. I’d love to say it looks way worse than it feels, but I think she just is a little badass.

Honestly, I’m so afraid to share this with all of you. TWO DAYS IN A ROW she’s been hurt: one out of my control and the other I could have prevented. Accidents happen within seconds and they’re so unpredictable. Mila literally sits in that same place everyday and never tries to get up or if she wants to move, she tells me up. I would have NEVER thought she would try to stand up, but she did and she fell. It only took one second. I go back and think why was I so dumb? Why didn’t I just pick her up to grab what I needed? So much mom guilt and at this moment I feel like I deserve feeling like crap.

Here’s the thing, this stuff happens all the time to moms (dads and guardians too) everywhere. Kids fall, they get stung by bees, and way worse even under a watchful eye. I am so thankful nothing worse happened to Mila because it could have easily been a fall to her death. There are so many different way kids die and here I am, knowing this happens, but putting her in a situation like this. I honestly feel awful, but I know it doesn’t make me a bad mom. There’s going to be many more ER trips and thinking I could have prevented them. But things happen and that’s motherhood for me and childhood for her.

Will I ever let her sit up on the countertops without me being right in front of her? Probably not.
Am I going to forgive myself for letting this happen? Eventually.
Has it taught me that Mila is stronger than I ever imagined her to be? Hell yes.

Even though I was so scared to be judged to tell you about Mila’s fall, I think it’s important to show that motherhood’s not perfect. It’s not always how you plan it to go and bad things do happen. She’s going to be okay and will have no memory of it as she grows up. I’ll always remember this and will make me even more aware of what I do with her. Everyday I’m thankful for having her and think how much peace and happiness she’s brought me. I have no idea what I’d do without her and that’s why I feel so bad for this incident. But I already know she doesn’t think any less of me as she looks up at me (with her face half swollen) and smiles like I’m the only person in the world.

Thanks for reading and understanding everyone. I’ll still be posting a million pictures of her, like usual. Even with a puffy face, she’s the most beautiful girl I have ever seen.